Our BLOG is brought to you by parents for parents. Sharing our insights and some of our favourite goodies

Not a week goes by that you don’t hear about another pregnant celebrity and her pregnancy cravings. Whether its pickles, avocados or waffles, a bizarre or even normal celebrity pregnancy craving is sure to make headlines. But what do we really know about what and why pregnant women crave? 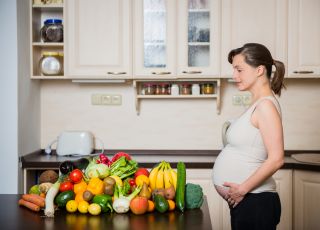 Why aren’t my pregnancy cravings for healthy foods?

Of course, pregnant women are not immune to general cravings.  So the cravings that people experience all the time will continue to occur during pregnancy. If a particular food, drug or behavior is of concern prior to pregnancy, the chances are good that an expectant mom will continue to crave it during pregnancy. Sometimes this is very dangerous, as in the case of some drugs like benzodiazepines or alcohol, where the substance might be toxic to the pregnancy. And sometimes it’s fairly benign, like a particular flavor of Ben & Jerry’s ice cream.

Often the maternal instinct is more powerful than the craving, and even an alcoholic mother may remain abstinent from alcohol during the pregnancy. At other times, the urges are too overwhelming. With behavior addictions and cravings (such as gambling) often the urges will intensify during pregnancy. And eating disorders can be particularly problematic during pregnancy, because the rapid changes in a mother’s body can be very difficult emotionally and can trigger all sorts of negative thoughts and emotions that surround body image and self-esteem.  These can often result in a worsening of bulimic or other self-destructive behaviors during pregnancy.

In general, these cravings can be addressed just like any other. Whether a craving persists at the same level during pregnancy, or intensifies, or the related behaviors are the same but the consequences are greater because of the pregnancy, the basic recommendations in the book to manage cravings can generally be employed. There are exceptions…some of the medications that are used to manage cravings may be unsafe in pregnancy. So it’s important to check with your physician about these medications if you think you might be pregnant.

There is, however, a class of pregnancy cravings that is all its own. These are the odd or even downright bizarre cravings that seem to occur only during pregnancy. They may be for foods that the expectant mother didn’t even enjoy prior to being pregnant. They appear during pregnancy (usually in the first trimester, peaking in the second trimester) and are generally gone before birth.  They seem unpredictable, and may even differ from her first pregnancy to her next. (While nausea and food aversion tends to happen at the same time, cravings are fairly unpredictable.) What causes these odd pregnancy cravings?

There are cultural factors at play as well. For example, women in different cultures clearly crave foods based on what’s regionally and culturally available. A study(link is external) of over 200 pregnant women in Tanzania found that the most common cravings among the women who craved were meat (23.3%), mangoes (22.7%), yoghurt (20.0%) oranges (20.0%), plantain (15.3%) and soft drinks (13.3%).  These are the rates among the cravers, but 60-90% of pregnant women will experience cravings during pregnancy depending on which study you believe. So obviously these are culturally influenced since clearly 23% of pregnant American women don’t crave mangoes. In fact, in the US, the most common pregnancy cravings(link is external) are for dairy and sweet foods, including chocolate, fruits and juices. Less commonly, pregnant women will crave savory or salty foods such as pickles or pizza.

There are a number of hypotheses about how these cravings that are specific to pregnancy occur.  Many of these explanations are hormone-based, which makes sense since several hormones shift significantly during pregnancy. Leptin is a hormone that your fat cells secrete, and it functions to reduce appetite and stimulate metabolism. On the other hand, a substance called Neuropeptide Y (NPY) is one of the most potent appetite stimulants known to man. It’s a substance that is manufactured in your hypothalamus and delivered to various regions of your brain to increase your appetite. For example, the research shows that if you inject this substance into specific parts of mouse brains you can dramatically increase their appetite. Recently, research(link is external) has suggested that NPY synthesis is increased during pregnancy, and may be responsible for some of the appetite increases seen in pregnancy. Other hormones such as ghrelin have been proposed as involved, but while these hormones might be tied to appetite changes in pregnancy, nobody has been able to use them to adequately explain specific food cravings in pregnancy. Also, much of these data are from animal studies, and mice probably have different taste preferences than humans! (Although who doesn’t love peanut butter and cheese?)

There is one exception to the above: diabetes in pregnancy. Some women will develop a condition called gestational diabetes, in which they will develop a type of glucose intolerance that is specific to pregnancy. Research does indicate that these women will crave sweets at a very high rate, especially during the second trimester. Over half of the women with this type of diabetes of pregnancy will crave sweets, and this craving tends to resolve by the time they deliver.

Pregnancy is associated with abnormal smell and taste perception, phantom smells, and specific food aversions as well. I believe that some (but probably not even most) pregnancy cravings may be related to a desire to “cancel” out these undesired aversions (a sense of bitter that is a phantom smell or taste may be neutralized by ice cream, for example). This idea is supported by some research(link is external) that suggests that salt sensitivity is decreased during pregnancy and bitter sensitivity is increased.

The bottom line is that, although we have some interesting ideas as to what might be causing the specific cravings of pregnancy, we still don’t really know.  More research is needed. So for now, when you hear about that model or actress who is craving Greek olives and Mike&Ikes during pregnancy, just chalk it up to one of the mysteries of nature.